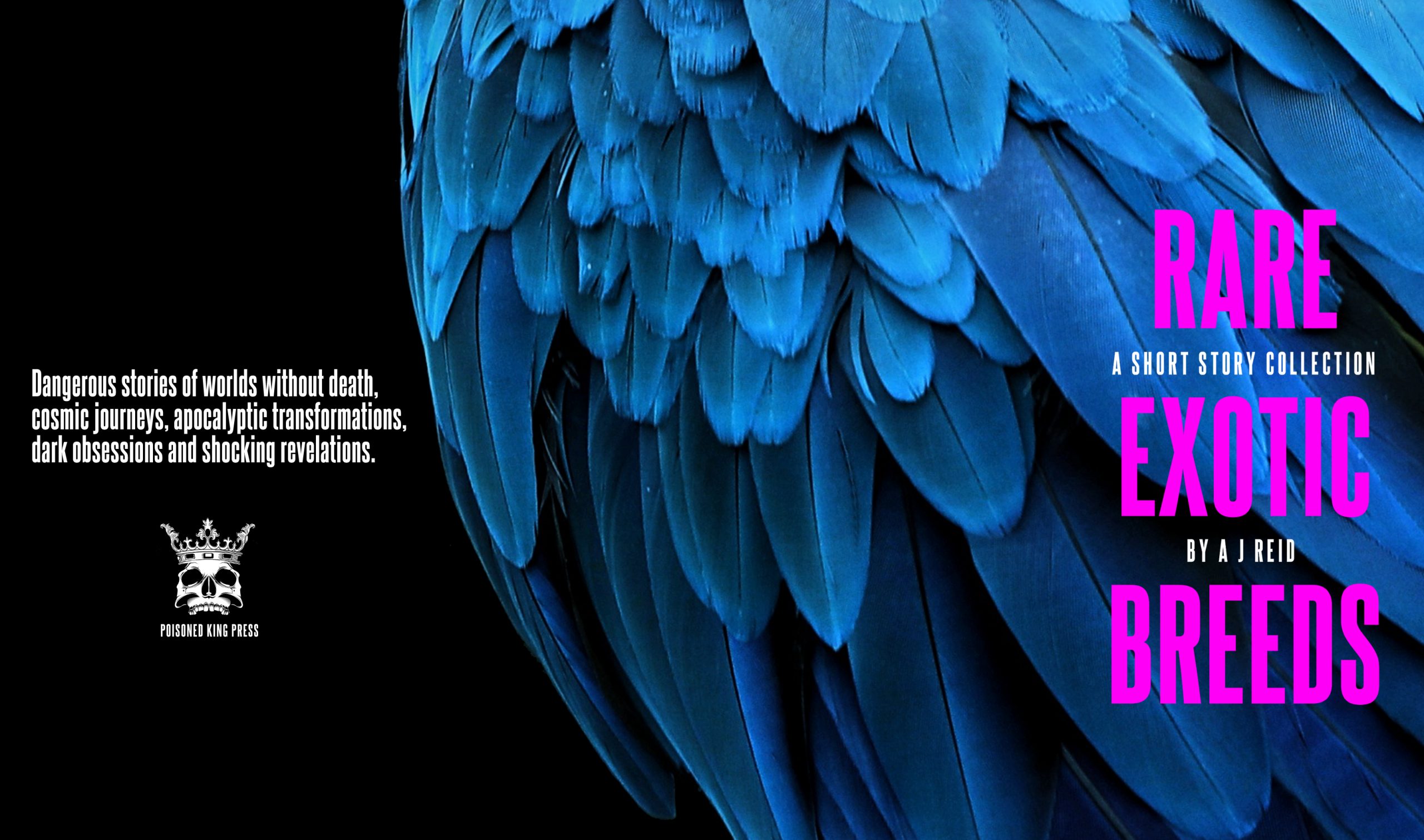 How Did Rare Exotic Breeds Come About?

Over the past three years, I’ve been submitting short stories to various competitions globally. Rare Exotic Breeds is a collection of all the stories that were prize-winners or shortlisted. After two consecutive first prizes and publication in Writing Magazine, the editor suggested to me that dark, mischievous literature might well be my “bread and butter”, so I continued to write in the same vein, enjoying myself immensely in the process.

The first story in this collection is the first prize winner that was published in Writing Magazine. “Chop-Chop” tells the story of a butcher’s breakdown and his terrifying solution to a relatively mundane, but unprecedented, predicament. Though I was concerned that it would be too nasty for most readers, it garnered a lovely response from readers who immediately picked up on the dark humour and deeper meaning of the story. Encouraged by the following comments from the competition judges, I set about writing more. Before I knew it, I had dozens of stories ripe for a collection.

What Can Readers Expect?

In Rare Exotic Breeds, you’ll find tales of AI modules that swing wildly between homicidal mania and saintly altruism, intrepid explorers equally interested in inner space as they are ancient temples and burial grounds, guitar luthiers who unwittingly hold the keys to the universe, a vicious theory about Jack the Ripper’s origins, train journeys with most unexpected destinations, war/climate disaster refugees and many other strange characters and situations.

It’s my own experiences and understanding of the human condition that have been most influential in writing these stories. That said, I cannot deny the inspiration lent by the likes of J. G. Ballard, Roald Dahl, Edgar Allen Poe, Robert Louis Stevenson, Arthur Conan Doyle and H. G. Wells. Esoteric, surreal, macabre, spiritual, psychological, romantic and mysterious are all adjectives I would use to describe their work and hope that readers might care to attribute to mine, eventually.

In the meantime, I hope you enjoy losing yourself in the wilderness of Rare Exotic Breeds.

Chop-Chop – An award-winning story about a butcher who goes to extreme lengths to solve an unprecedented dilemma.
Pillar of Heaven – The story of a barfly’s transformative celestial encounter.
Consecutive Sentence – What happens to a man when he is forced to serve a 200-year sentence in a world without death?
Laundretta – A traumatised and alienated refugee finds herself all alone and free to do as she pleases in the five-star hotel where she works, but why?
Stazione Termini – A journey seemingly to the heart of an ancient city, but where is the train’s real destination?
Memorial – The central rite of passage in this utopia demands that the young and “Wastelanders” alike experience death through the consciousness of a classic poet of their choosing.
Enclosure – A Kafkan warning about heeding the advice of one’s mother.
God’s Providence – During a global pandemic, the looming spectre of death gives a city tour guide cause to veer from his usual shpiel into more profound musings, recollections and hopes for the future.
The Blessing – Victorian Whitechapel at the height of the Ripper murders proves to be a most dangerous time and place for a priest with a dark secret from his days as a merchant seaman.
Luthier – A jaded recluse is getting ready to shut down his remote guitar repair shop for the winter when a visitor bearing strange gadgets and mind-blowing information comes knocking.
Number Withheld – A bewildered young man wakes up alone in an old telephone box overlooking a small town in the valleys, unaware that he is about to be tasked with changing the course of history.
The Lake – With drought and wildfires rampant across the world due to climate crisis, refugees from rural, forested areas arrive in cities to awkward, sometimes hostile, receptions. This is the story of a group of deeply traumatised schoolchildren struggling to integrate, until one of them comes up with an idea that proves to dispel fear and promote unity.
Rare Exotic Breeds – A reformed criminal gives a chance to a juvenile delinquent by offering him a job in his exotic pet shop. When the delinquent falls in love with a customer, a shocking transformation occurs, taking even the grizzled, cynical shop owner by surprise.
The Quetzal’s Coda – An adventurous and unorthodox researcher is missing one final piece of a puzzle he’s been working on for years. To find it and reap what he believes will be cosmic rewards for all of humanity, he must venture deep into the Guatemalan jungle …
Katy and the Spider – A Death Row inmate gets more than she bargained for when she befriends a deadly arachnid in her cell.
Burgher Burger – A secret society’s dark rituals backfire in the most gruesome way.
Codename: Tinkerbell – An exponent of “sexpionage” lures an anti-establishment artist into meeting her at a gallery, where her superiors expect her to follow their orders without question.
Egg – The tale of a disembodied, digital consciousness prone to good and evil, just like humans. Destined to transcend the limits of earthly intelligence and existence, Egg must wrestle with angels and demons alike to determine where his – and humanity’s – fate lies.
Gwenllian – Based on the author’s real life experience of a late night trip to a haunted castle in a forest, this tale invokes the legend of the “lost princess of Wales”.
Tight Lines – An army general whose daughter has been kidnapped has no choice but to call on an old friend for help via her highly unorthodox methods.
The Weight of Grief – The story of a daring heist in a frozen wasteland serves as a dark parable about greed.
White Rabbits – A single, working mother stuck in a traffic jam has her life turned upside down by a bizarre radio broadcast.