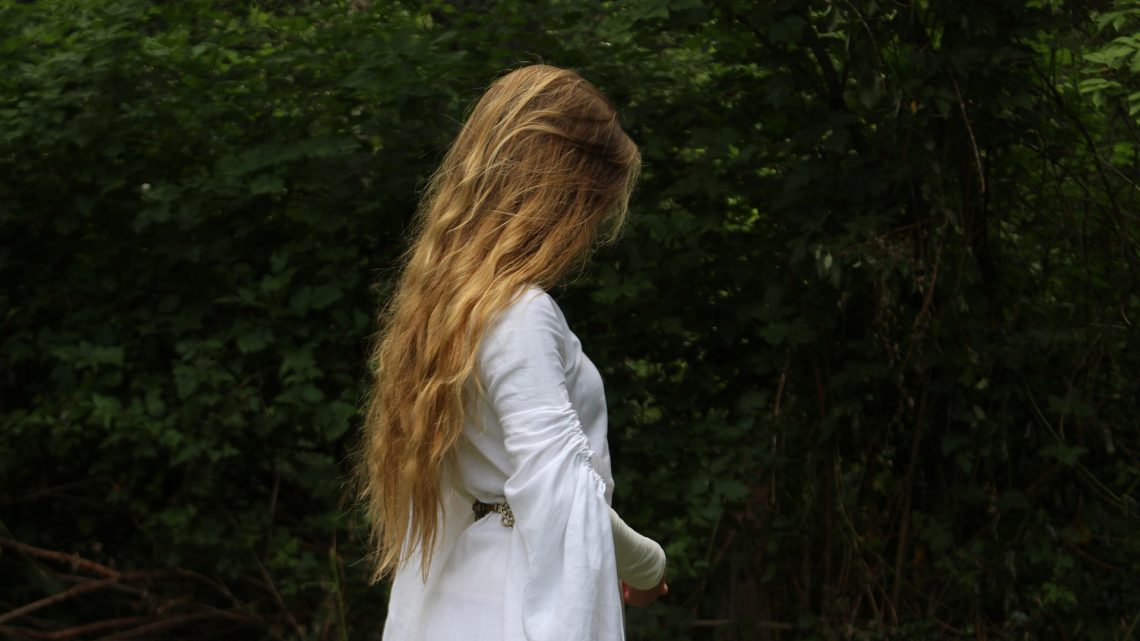 I could never have predicted how I would die. I always thought it would be a car crash or botched heist, maybe a war – something cinematic. Not once did it ever occur to me that I might die of fright. Too young. Too sturdy. I’d heard about it happening to other people. Turning their hair white. Affixed expressions of terror in their death masks. Hearts stopping instantly as if the life were suddenly squeezed out of them. Tabloid stuff. Horror film trope. Never happen to me, that. But it was her eyes that did it. That look she gave me. If looks could kill.

To find Nora the Nun

Who? I’m not going anywhere in this weather.

U need rain to hear the army marchin

Twenty minutes after the texts, I’m rattling towards the Welsh border in a once-white work van. Hogie’s lounging in the driver’s seat with a rolled cigarette protruding from the ecosystem of his beard while Katelyn and J share a can of lager in the back.

‘What’s this about an army?’

‘On the way up to the castle, they say you can hear the ghost army marching through the woods.’

‘I thought you were scared of ghosts?’

Hogie glances in the rear view mirror at J and Katelyn.

‘I’m not scared of anything.’

‘So you didn’t call me after watching Supernatural Activity last week?’

‘You were almost crying.’

I can hear Katelyn trying not to laugh.

‘He’s just winding you up, Katelyn. I wasn’t crying.’

‘Aw, Hogie. Nothing wrong with crying.’

As Katelyn pats his shoulder from the back seat, Hogie rolls his bloodshot eyes at me. ‘Least I didn’t pee my pants on that ledge up Tryfan.’

‘I could have died. You and your grotty old climbing ropes—’

‘You just missed the turn.’

J swigs the last of his can, crumples it and leans between the front seats. ‘Boys, give it a rest.’

‘What about you, J? You scared of ghosts?’

‘Only the ones on the estate.’

We pull up in a lay-by on a country lane and follow a footpath into the wood. The rattle of the fat rain on the van’s bodywork fades and the wind whistles through the bare trees’ looming branches. Our feet rustle and squelch in the dead leaves, but none of these things sound anything like a marching army.

‘Where’s these ghosts? Spent pure wedge on this torch. Wanna see more than trees, like.’

J drains another can of lager.

‘I just hear rain. There any shelter at this castle, Hogie?’

I walk ahead of J and Katelyn, who are now holding hands. Don’t wanna be the gooseberry. When I reach the top of the steps, I see a light, perfectly round and white, hovering over the stream running through the small valley below. I assume that it must be other ghost-hunters and take a drink of my beer, but in the corner of my eye, the light starts to rise. Higher than anyone could climb any of the trees until it disappears into the scratchiest extremities of the tree line.

My breath fogs in front of me as the air temperature plummets. I lower the crushed can from my lips and release my grip.

Hogie emerges from a cloud of smoke, searching the darkness earnestly. ‘See what?’

‘A ball of light came out of the river and floated up into the trees.’

‘Probably just a reflection from your torch. Come on.’

The castle ruins are exactly what they say on the tin: ruined. What little remains of them looks more like fly-tipped masonry.

Our torches converge on a plaque relating the history of the castle. After a minute or two, Katelyn yawns, releasing a cloud of breath across the text.

‘Yeah, well. This doesn’t tell you about Nora the Nun.’

‘You’re making this up as you go along, Hogie.’

‘You can look it up. She wasn’t really a nun, though.’

‘She was a princess.’

‘Google it if you think I’m lying.’

‘What happened to her?’

Hogie swipes and taps at his phone. ‘After Gwenllian ferch Llywelyn’s mother died giving birth and her father was killed in battle against the English in 1283, King Edward I locked her in a Lincolnshire priory until her death 54 years later. Look, it says right here.’

‘To stop her becoming a …’ Hogie swipes down. ‘A nationalist symbol: the last Welsh Princess.’

The rain stops hammering on the ruins. When we walk back out into the open air, it feels and smells crystal clear, as if we could see into the deepest recesses of the wood with our torches. Without the wind and rain, I can hear water dripping from the dead branches surrounding us. It sounds slow and thick compared to the storm.

Hogie puffs rapidly on his cigarette as his eyes scan the darkness. ‘Fine, we’ll just go back to the van if you’re all too chicken.’

He leads us down another set of steps towards a stone bridge across the small river: the exact spot where I saw the light. As we step onto the structure, the air buzzes with cold electricity and my body feels light, as if it might blow away in the breeze.

J clatters back into me as if stricken by something. It’s only my boots that stop him cracking his skull on the bridge’s stone. I look down at J’s shaven head resting on my toes and shine my torch in his eyes, but he doesn’t flinch or breathe, even when Katelyn stoops down to help him.

As if unpaused, J snaps out of it. The way his eyes change makes me feel like God isn’t watching over us anymore. Like we’re on our own: out on a limb. No safety net.

J crawled to the end of the bridge and retched into the cold, wet soil.

Tears are streaming down his face. I pull him up off the ground and give him a can. With shaking hands, he opens it and drinks, but vomits it back up instantly.

‘Jesus, can you smell that?’

In the distance, I hear Hogie’s long-suffering trainers hammering their way back to the van. Where he was standing, a freshly-rolled, hastily-dropped cigarette still smokes. Ten feet away, Katelyn stares into the woods, muttering to no-one. Between J’s sobs, I pick up a few of Katelyn’s words.

I stand beside her and look into the same spot. A naked woman stares back at me from between the trees. She has eyes like glaciers rolling unstoppably towards me, over me, subsuming me into a dark, frozen womb.

I live a cold and lonely lifetime before I even hit the ground, locked away in a stone room with a small bed and a mere slot for a window. As I get older, my skin turns grey and my hair falls out. I wake up from terrible nightmares every morning about the mother and father I never knew, the lovers and friends I never met, the simple pleasures I’ll never taste, smell, hear, see or touch. It feels more real than my waking life as I sink alone into the cold mud of time.

When I wake up in the hospital bed, the first face I see is my mother’s. She wipes her tears away and holds my hand.

‘The doctors said your heart stopped for nearly a minute.’

Katelyn appears in my peripheral vision, her hair uncharacteristically ruffled and her eye make-up smeared. She fidgets with her hospital gown.

‘Katelyn told me everything. I thought you all must have been high until I looked up Gwenllian’s story. Then I saw Katelyn’s surname on her wristband.’

Katelyn holds it up for me to read, but I know it already. I sigh under the weight of this epiphany. Any hope that it could have been a bad dream has just been crushed out of me.

Katelyn won’t make eye contact with anyone. Can’t say I blame her. ‘She kept calling me mother. Begged me not to forget her.’

A nurse interrupts to take my blood pressure while my mum and Katelyn retreat to the cafeteria. It’s the last time anyone mentions what happened in the woods round Ewloe Castle that night, against the wishes of the princess.

They won’t talk so I have to write this. Please don’t forget Gwenllian. My life might just depend on it.

And I don’t want to die again anytime soon.

If you’d like to read more stories by AJ, “Gwenllian” is included in this collection of short stories RARE EXOTIC BREEDS.
To check out AJ’s other books, try HERE.