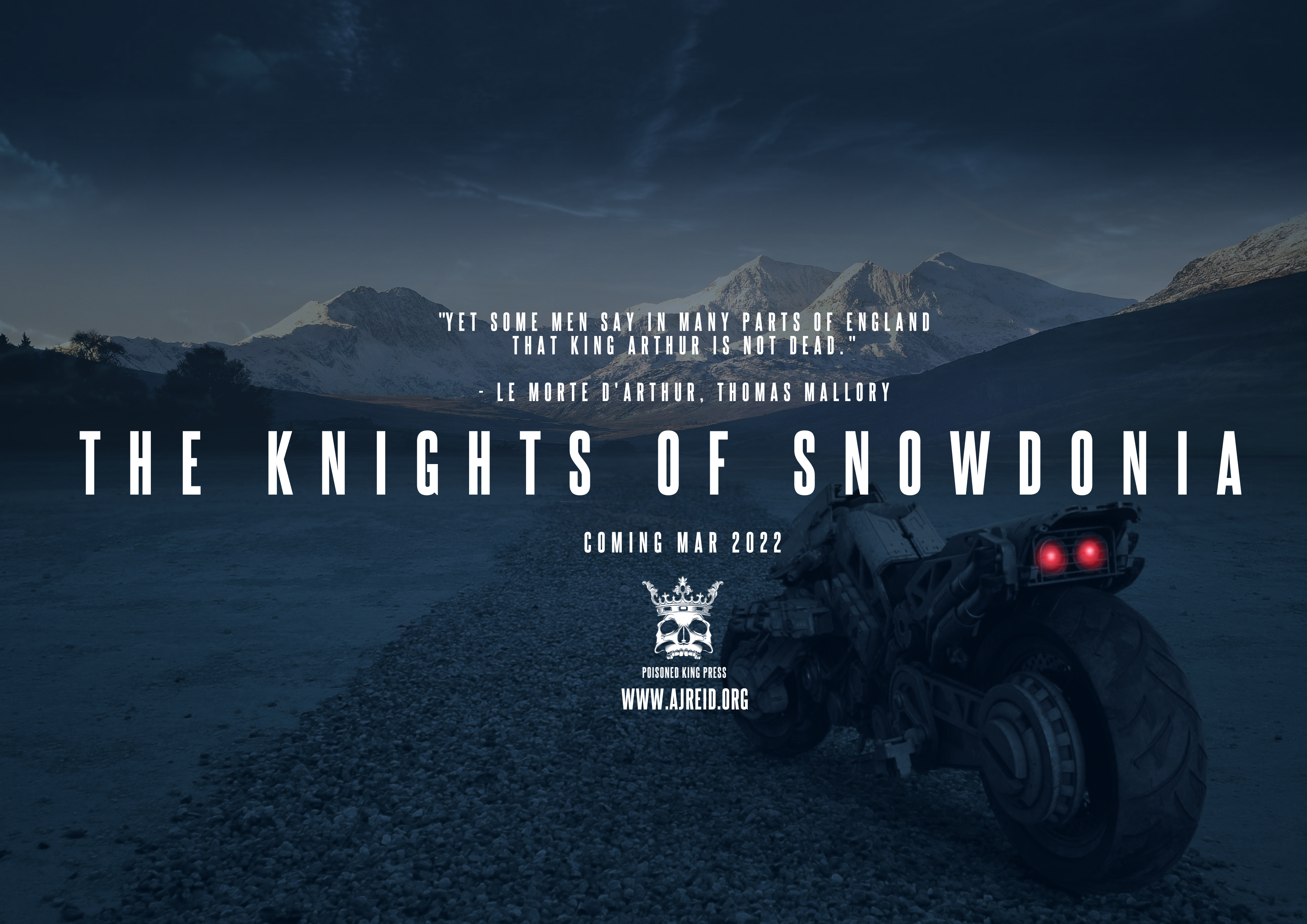 The Knights of Snowdonia

The Knights of Snowdonia is another novel that’s been a long time coming. I’ve described it in various promos as:

The Knights are the frontline in a war that’s been raging in the shadows for thousands of years. Not all of them are soldiers, though. Some are healers, musicians, thinkers, artists, engineers, scientists and activists, playing an equally vital role in this strange battle that affects all of us on a daily basis.

I’m writing of spiritual warfare, of course. That constant push/pull between good and evil occurring not just in the world at large, but within all of us, too. The Knights of Snowdonia hold one directive above all others: to protect children far and wide at any cost. They know that the suffering and sacrifice of the innocent is a great boon to the ancient forces trying to pull the world further into darkness and are sworn to defend kids with their lives to prevent this from happening.

That’s not to say that the Knights are all perfect, fully enlightened beings without any problems of their own. Quite the opposite in fact, as they wrestle with their own issues, just like all of us.

Where Did the Idea Come From?

Largely from being bullied as a child by older kids and teachers alike. If any of you know what this is like, you’ll also be familiar with the crushing loneliness that comes with it. If you look different, life can seem extremely cruel from a young age and when people you thought were friends abandon or even turn on you in times of need, it can be doubly devastating.

I found solace in books, escaping into other worlds where the bad guys got their comeuppance and the meek inherited the earth/got the girl/lived to fight another day. Often, I’d stay up all night, unable to sleep with fear of the following day at school and whatever agonising humiliation it would undoubtedly bring. It was in these wee small, dread-filled hours, with the flawed, but pure-hearted, heroic and compassionate characters of fiction that I kept a spark of hope alive that everything might turn out ok. And to the authors of those works, I’ll always be grateful.

This novel is my attempt to provide the same comfort for anyone suffering any kind of oppression. It’s the book I would have wanted to read when most embattled and hopeless. I hope more than anything that it serves to reassure the down-hearted that good still exists in the world, that they’re worthy of love and kindness and that they can survive the cruelty of others to fulfil their true potential. I dearly hope that it proves to be a worthy contribution to the ongoing -and very real – spiritual war.

It was during an “unofficial” visit to the abandoned site of one of my childhood haunts that first gave me the idea of incorporating Arthurian legend. Many of you, especially fellow northerners, will be familiar with the Camelot theme park. It was here, whilst waiting out a siege with site security in the big wooden castle, that Thomas Mallory’s words came back to me:

Yet some men say in many parts of England that King Arthur is not dead.

Once we’d escaped the quad bikes and made our exit from the site, the journey home down the M6 provided me an opportunity to outline the story on whatever scraps of paper I could find in the murky depths of the van’s footwells. And it really hasn’t changed all that much in the years since.

Another major inspiration would be a much-loved family member who I knew had connections to various military organisations. He not only explained, but also vividly demonstrated the complexities of his work during a road trip around Europe. The less said about that, the better, probably.

Despite my suspicions about his connections, it came as no small shock some years later when an Interpol agent turned up at my door, demanding I give up the aforementioned family member. Meanwhile, taser-equipped police surrounded the house. The stand-off proved short-lived as the agent showed me an international arrest warrant stamped by Interpol and the FBI. Can’t say I fancied being tasered much, either.

Finally, the Near Death Experience mentioned in my last blog post certainly informed the more metaphysical aspects of the story. Of course, there are many people from my life who have inspired the characters. A few of them have honoured me with their friendship and I thank them without qualification. Begrudgingly, I must also thank those who have not been so friendly. Without them, I might never have been compelled to write this book.

One thing of which I’m never short is source material. Definitely a blessing AND a curse.

When and Where can I Buy The Knights of Snowdonia?

The Knights of Snowdonia is due for release this weekend in both Kindle and paperback formats on Amazon. Shortly afterwards, when I have received my author copies, I will make signed paperbacks available from www.ajreid.org.

Check out this article if you want to know more about epigenetic memory.

Try this if you’d like to know more about the connections between King Arthur and Wales.

Another article on King Arthur and Snowdonia.

Or click here to find out about other novels by AJ Reid.