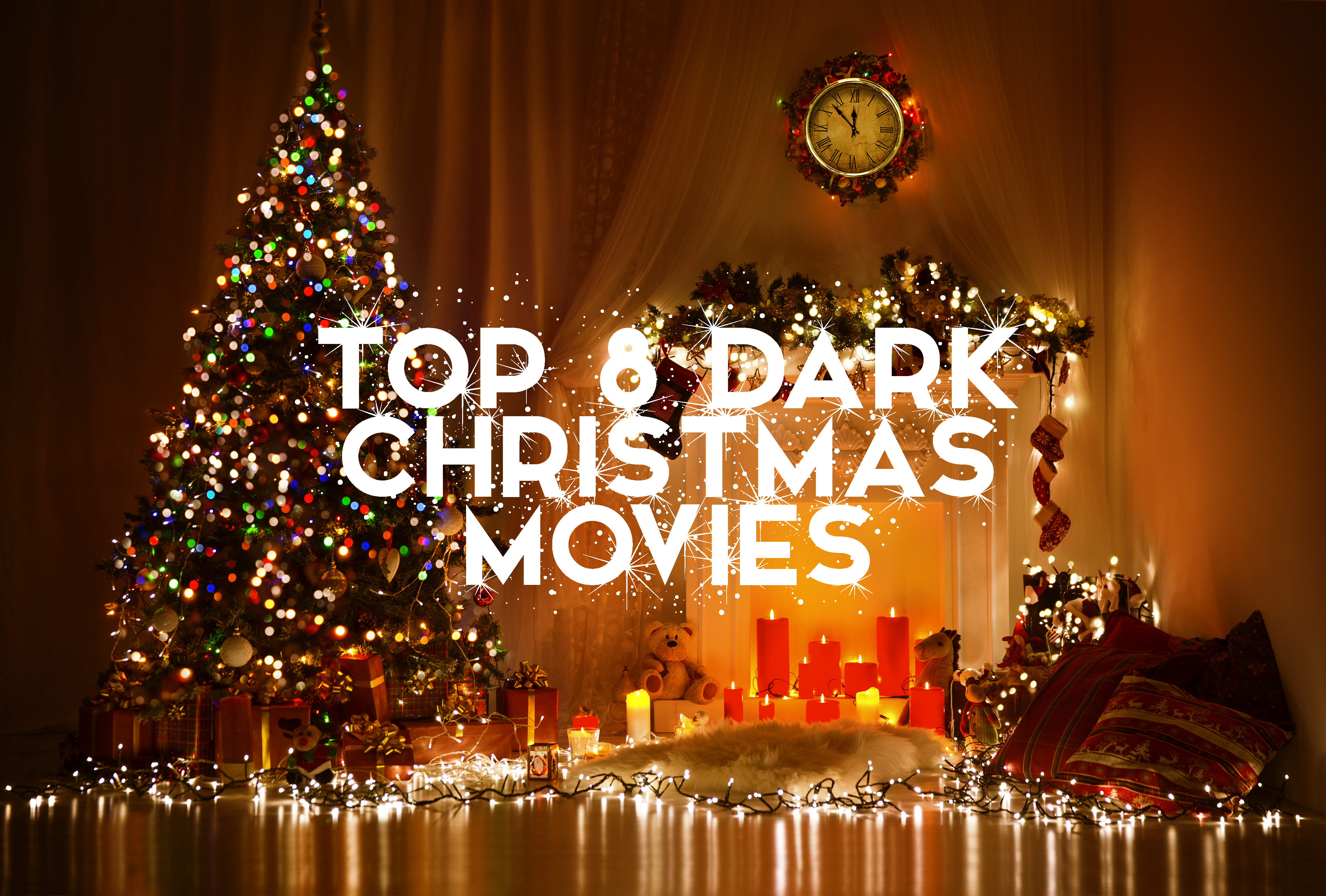 Christmas lights are going up, along with burglary rates, energy bills and collective blood pressure. It must be that magical time of year again, so let’s celebrate with a list of festive films for the broken idealists among us who need their fix of sarcasm and cynicism to keep them going over the following month.

80s nostalgia seems to be a thing at the moment and although Stranger Things was more comprehensive in its fanboy-like homages, Krampus does it with delicious dark humour, strong performances from the cast, snappy dialogue and a creepy take on the Christmas redemption story, which all makes for a fun ride for adults wishing to relive the excitement of watching Gremlins for the first time, or for older kids who still want to believe in Father Christmas.  Special mention must go to the delightful animation sequence in which the grandmother flashes back to post-war Germany to explain her connection to St. Nicholas’ malevolent counterpart.

Something of a spiritual predecessor to Bad Santa and a truly 80s New York take on Dickens, this films sees the brilliant Bill Murray on fine form, dishing out sarcasm and meanness as a dastardly TV company exec.  The sentimentality is offset by surprisingly dark and imaginative dimension-hopping sequences with the ghosts, all of which are met at first by an unimpressed, sardonic Murray, who soon finds himself forced to alter his outlook, as Scrooge does in A Christmas Carol.  Karen Allen puts in a wonderful performance as Murray’s old girlfriend, whose love and generous nature helps to bring him in from the cold, while the family scenes of Christmas possess an air of warmth and authenticity that will pull at even the most rusty heartstrings.

Debatable as to whether it’s a true Christmas film, but there are myriad aspects of Michael McDonagh’s 2008 masterpiece in which to revel as a seeker of dark festive fayre.  Let’s start with the performances from the cast.  Previous to watching this film, I disliked Colin Farrell quite unfairly on account of a most untrustworthy upper lip and a dastardly set of eyebrows. However, his portrayal of a bungling, guilt-ridden hitman in this film was enough to win me over and I’ve enjoyed his work ever since (even if the eyebrows get a bit hammy now and again).  Given the perfect foil in Brendan Gleeson’s character, a seasoned veteran of the same dirty game, the two set the screen alight with their chemistry and along with the haunting, atonal piano soundtrack and “fairytale” scenery of Bruges, keep our attention and build our sympathies until Ralph Fiennes shows up and steals the show briefly with his pantomime, psychopathic gangster, Harry.  When Harry turns up in Bruges, the film accelerates into action thriller territory and we are rewarded with an electrifying chase through the cobbled streets until the rather brutal climax.  Sacrifice, redemption and forgiveness are all themes explored by the film, but what sets it apart is a curious, subtle acknowledgement of the cycle of life and the sanctity of family.  By their nature, existentialists are usually rather miserable, but here they will find enough mischievous musings on the void to raise a wry smile at the very least.

Cosy, friendly, small American town subverted by a plague of creatures can only be saved by small town boy and his girl.  Sounds like a B-movie plot?  That’s because it is, but it is executed with such flair by cast and crew that we couldn’t help but be beguiled and terrified by it back in the 80s.  The microwave and the blender death scenes were legendary amongst schoolkids because of the parental disgust factor.  Subversion is a vital ingredient in nearly every film in this list and the Gremlins symbolise that perfectly: grimy green, fanged, homicidal reptilians that reproduce asexually and were considered to be the cause of mechanical failures in aeroplanes during World War Two, according to the legend recounted by the memorable Dick Miller as Murray Futterman.  If people really do crave the catharsis of the utter chaos and destruction of Christmas in their viewing material, then Gremlins is the one, even taking down a department store in the proceedings.  The more politically-inclined amongst you might be able to divine some symbolic meaning from this, but for me, comparing gremlins to Communists might be a bridge too far.  Maybe Anarchists …?

Motormouth comedian Denis Leary goes into sarcasm overload in this black comedy following the events of a failed burglary on Christmas Eve, once again in a snow-covered, small American town.  It’s a smarter, more highbrow take on the Christmas crime capers we know and love, largely thanks to a good script, Leary’s comedic timing and Kevin Spacey’s double act with Judy Davis as his neurotic, unfaithful wife.  It is remarkable how similar Spacey’s character is to the now-legendary Lester Burnham character he portrayed in American Beauty, but to neither film’s detriment.  Quite the opposite, in fact.  As I mentioned earlier, subversion is key to the functioning of most of these films and here, it takes the typically John Hughesian house from Home Alone and delivers the criminal into the midst of a family that’s corroding under the emptiness of modern life, even though ostensibly, they have everything we found so seductive in those onscreen mansions.  A delightfully mischievous and sardonic romp, especially fun if you like Denis Leary.

Technically set during Thanksgiving, but we don’t get that here in the UK for obvious reasons, so I think most us Brits just pretend that it’s set at Christmas so as not to confuse ourselves.  Steve Martin and John Candy are the prudish businessman and free-wheeling shower ring salesman who are thrust together by fate to get home for Thanksgiving.  It isn’t long before Martin’s stiff upper lip is wobbled by Candy’s incessant small-talk and oafish mannerisms and John Hughes begins really pitting them against each other in a series of set pieces, which will keep you laughing until the twist, carrying the emotional punch we have come to know to be typical of Hughes.  Themes of tolerance, compassion and co-operation underpin the spiritual message of the film, which serves as a helpful reminder to us all, come Christmas Dinner.

Billy Bob Thornton explores the depths of the human condition whilst dressed in a Santa outfit, but it’s Bernie Mac and John Ritter who provide most of the laughs: Ritter need only react with a facial expression to keep us giggling with his sublime, understated performance, while Mac delivers his dialogue with such ferocity and cadence, that we can’t help but wait for the next vicious insult or epithet with bated breath.  Many would tell you that the crucible for this story is the department store, but the real pickle in which Billy Bob’s character Willy finds himself is human relationships, from which he has distanced himself to the point of developing an anti-social personality disorder.  Will the Christmas spirit help Willy rediscover his humanity?

One of Nicholas Cage’s less celebrated films, which has always taken a critical beating – probably not unfairly, to some degree.  However, if you need a film that will not tax the old grey matter too much and provide some cheeky laughs, you could do a lot worse.  Although the humour is brash and crude in places, the message is uplifting and the cosy, small-town atmosphere evoked by director George Gallo is most seductive.  Nicholas Cage is over the top as always (would we have him any other way?), but thankfully, there are no bees or wicker men involved here, and his style is well complimented by the Stooge-like Dana Carvey and Jon “who, me?” Lovitz.  The show is admirably stolen by their foul-mouthed mother, played by Florence Stanley, who torments her meathead, no-necked kidnappers to tears.

If you’re in the market for a dark Christmas story you’ve not heard before, try my take: A Smaller Hell.  Based on my own experiences of working in a department store, it follows the story of a disillusioned man who doesn’t realise that he is being pulled into a dangerous game by his new boss – a game that will change his life forever, come the night of the Christmas party.