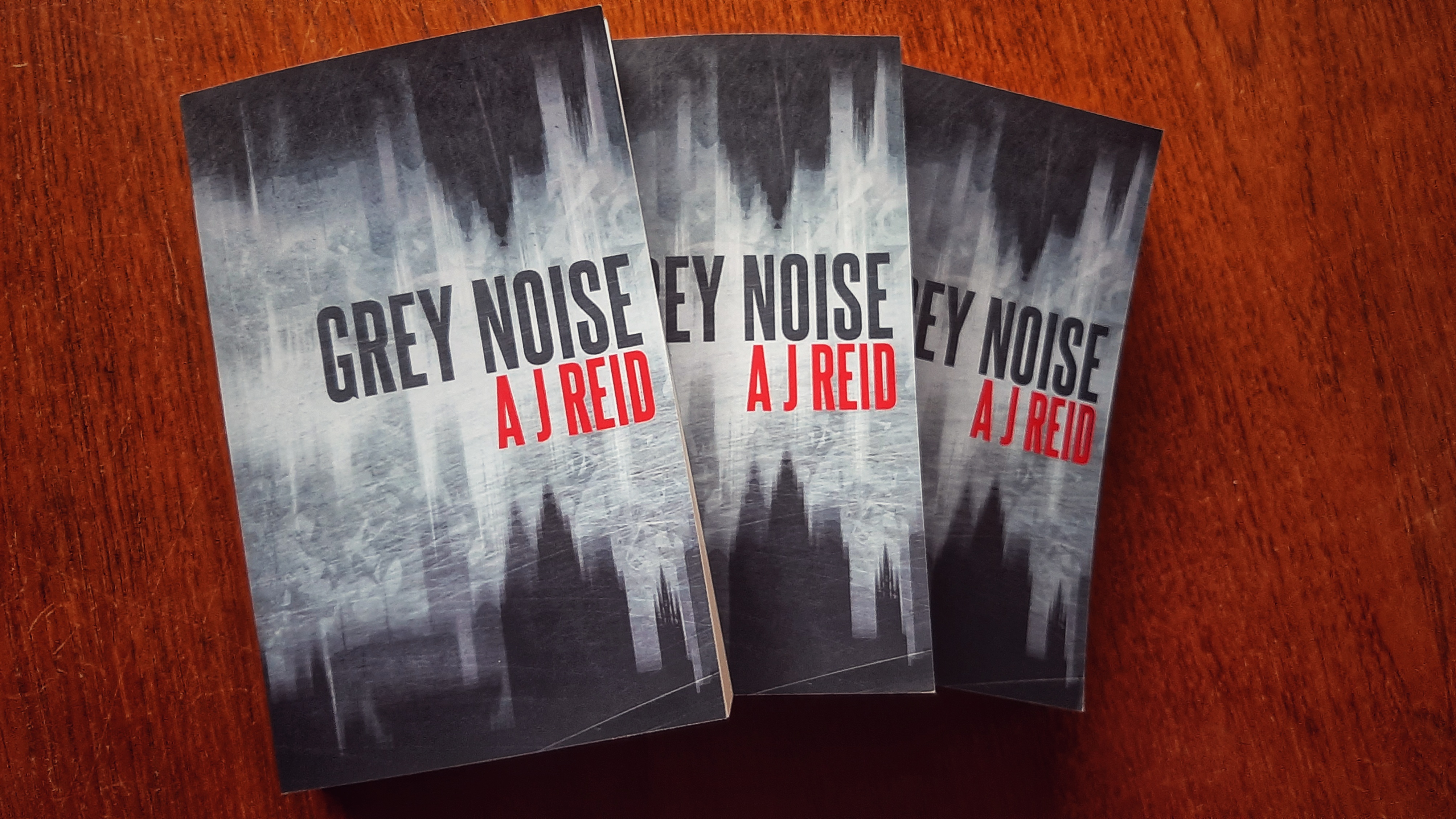 What is the Grey Noise?

Grey noise is random noise whose frequency spectrum follows a psychoacoustic equal loudness curve. In other examples, we can find pink noise, brown noise and the most familiar one, white noise. For our protagonist, Patrick McDonagh, it’s the bane of his life. He finds himself driven to unspeakable acts in trying to quieten its constant ringing in his head. These acts eventually lead him to become entwined with the criminal underworld where he is offered a chance to turn around his miserable existence.

Having served time as both performer and sound engineer, I came to understand the dynamic between these two roles as vital, but often fraught with all kinds of tension and misunderstandings. Once, when I was working with a sound engineer on a full album project, we became quite good friends and he admitted to me that he kept a list of musicians he’d like to murder, which I found hilarious. Doubly so upon checking his list and recognising many of the names. He was such a gentle guy with a great sense of humour, but there was a glint in his eye that made me wonder just how well I knew him.

Another engineer from very early in my career also provided inspiration as I worked in the same studio as him for several years. He was so unassuming and quiet that few people ever gave him the credit he deserved for his talent. At soundchecks, it pained me to listen to how other people, musicians and managers mainly, would treat him so rudely and disrespectfully. I often wished that he would slap the granny out of some of them, but he never did. He just always made sure that he did his job as well as he could and I admired him for that strength of character.

Conversely, I’ve encountered the genuinely sociopathic, too. At a gig in Wales a number of years ago, I was robbed of 60% of my hearing in my left ear and blighted with permanent tinnitus by a “sound engineer” who was furious that I’d been asked to perform instead of him. Using a hugely powerful sound system, he “accidentally” produced feedback at maximum volume from a speaker that was maliciously directed at my ear. I couldn’t prove that it wasn’t an accident and he apologised profusely, but that didn’t help to repair the permanent damage already done.

Of course, there are scenes and events inspired by my own musical adventures in Nashville, LA and NYC, too. Having worked with legendary Motown session musicians, Def Jam Records producers, 80s synth-pop platinum-sellers, chart-topping girl bands and Spinal Tap-esque rock bands, I’ve seen and heard quite a bit across the board that made for worthy inspiration.

Regarding inspiration for the gangland elements, the less said about that the better, probably. I’ve always been in touch with Merseyside’s “underbelly” ever since my parents received a threat on my life when I was 5 years old. It was over a protection racket being forced on my dad’s nightclub that had already turned violent on the door. Throughout my whole life, these shady characters always seemed to be around. At 18, I experienced something at the hands of organised crime that I’d rather not go into here, but suffice to say it changed my life, leaving me with severe PTSD.

The following year, I was working as a PT instructor at Liverpool University Sports Centre and before long, found myself contracted to a notorious Liverpool security firm for boxing circuits. I became friends with a few of the lads, but it was to be short-lived as the whole episode concluded rather violently. With no desire to be staring down the wrong end of any more firearms in the future, I quietly excused myself from the whole situation. Sadly, it also meant forfeiting my job at the university, too.

Despite trying to put some distance between me and this world, performing in bars and clubs would still later get me sprayed with the blood of a gangland assassination victim, stitches from confrontations with self-proclaimed “gangsters”, teeth knocked out and death threats for refusing to be pushed around. There seemed to be no escape from these people.

The truth is that most “gangsters” are juiced-up, coked-up, cowardly, narcissistic bullies, but often, new “recruits” are just ordinary guys swept up in things over which they have no control. Some genuinely repent and change their lives for the better. Some get shot in gym car parks. Or worse. Some of them are genuinely terrifying psychopaths. In case you’re wondering, the character of Inky Joe is based on a debt collector I knew who used exactly the methods described in the book to extract money from overdue debitors …

Sounds Dark, Violent and Depressing. Remind Me Why I Should Read This Book?

Because we all have our own “underworlds” to navigate at some point: serious illness, bereavement, toxic workplaces, abusive relationships, mental issues, etc. My hope is that Patrick’s story serves as a reminder that beautiful things can flourish in the darkest times and places of our lives and although we might not always get what we want, we can still get what we need.

Admittedly, you’ll need a dark sense of humour and a strong constitution to get the most out of this psychological crime novel, but I think we’re all developing those qualities increasingly to cope with the absurdity and darkness of our ever-changing world, so don’t be afraid: pick up a copy today and immerse yourself in Grey Noise.

If you enjoyed Grey Noise, why not check out A Smaller Hell – a gritty novella shot through with the same dark humour, set in a department store at Christmas.