Heswall shore: a muddy beach/marsh in the north west of England that will always be in my heart.  As well as being my playground since I was a little boy, I’ve worked, fought, bled, cried, fallen in love and broken up there.

When I was a personal trainer, I used to have a client who was a wealthy venture capitalist and hedge-fund manager.  He employed me for a few years and we became good friends, always interspersing our workouts with  conversation about allsorts of things.  Being in the type of job he was in and having that kind of money, he was well-travelled and would regale me with stories of derring-do from far-flung corners of the globe on a regular basis.  One day, we were taking a break from interval sprints, overlooking the Dee estuary, and he said something to me that has stayed with me ever since:

‘That’s still the best view in the world.’ 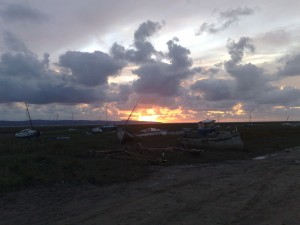 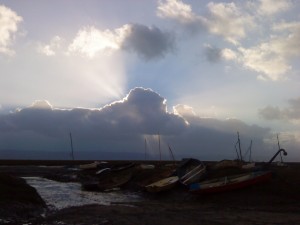 I’d never taken the views for granted, nor the wildlife.  Foxes, bats, herons, peregrine falcons, hen harriers and short-eared owls are just some of the wonderful creatures that can be spotted and heard.  There’s always something to look at, including the wrecks that make up the infamous Heswall graveyard.  Weathered dreams set in fibreglass and good intentions caked in mud and marsh grass left to disintegrate.  Some people complain, but if it’s such an ugly sight, how come we see so many intrepid photographers holding their tripods aloft like soldiers with rifles as they cross the perilous mud, leaping the gutters and sinking thigh-deep on a mis-step?  Personally, I love it all before I even look up at the Welsh moels and moors tapering into the Irish Sea near the lighthouse at Talacre: a view which reaches its zenith as the sun is going down.