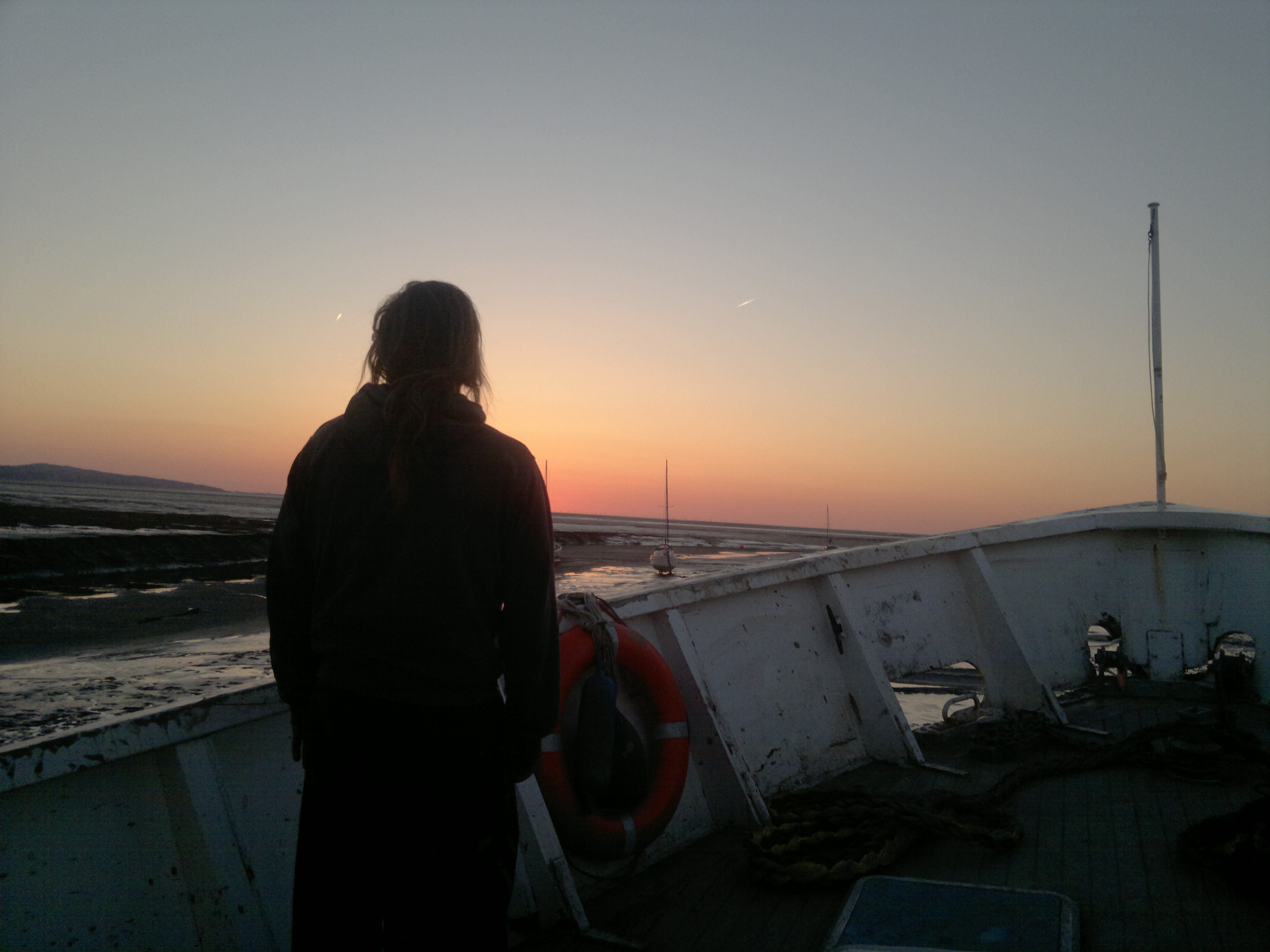 Last night, after the captain and crew went to bed, I stuck around on the bow of the Sarinda to catch the Perseid meteor shower.  I wedged my rucksack under my head and kept my eyes fixed on the night sky until bright green lights began streaking across it, leaving vapour trails in their wake.

I didn’t have a wish ready: I had to root around for one, trying to choose something not too selfish and not too far-fetched.  The corner of North Wales looked like it was being attacked from space at one point, making me wonder what would happen if one were to strike the estuary, which is still reported to be full of unexploded bombs from World War Two.

It reminded me of being a child again, when I used to play with my friends down on the shore, discovering and investigating wrecked boats and winding gutters.  We made The Hidey Hole out of a huge concrete pipe that had been discarded in the woods and launched regular water pistol assaults on another gang from there.  There were rope-swings, rope-bridges, fox-holes, tunnels, BMX ramps and a potentially lethal zipline.

Unauthorised use of our facilities was the most common cause for confrontations, which often escalated to the point of parents getting involved, displeased at their beloved little angels coming home covered in mud and soaking wet, having lost the territory battle.  No-one ever got really hurt.  An older brother threw a brick at me once, hitting me in the leg, but it didn’t do much damage.  I just pretended it did, so that his mum would ground him, taking him out of the equation for a week and leaving his brother fair game for another water-bombing.

More often than not, we all ended up playing together and becoming friends after the initial tribal stand-offs, building yet more jumps, slides and ramps, after which we would go to one another’s houses for the ubiquitous dinner of fish fingers, chips and peas.  We would be careful to mind our manners and remove our shoes if it was “that kind of house” for the benefit of our pals more than anything, so that they would be able to continue to come out to play.

Things changed when one of our gang discovered fire.  He proceeded to blow up The Hidey Hole (literally cracked it in two) with a load of deodorant cans, changed up his Super Soaker water pistol for a can of WD40 and a lighter and set fire to another gang’s BMX tyres.  The police got involved when neighbours from half a mile away heard The Hidey Hole go up.  It was with immediate effect that all of us were banned by our parents from playing down on the marsh anymore.  Sometimes, I would ride my bike down there to see if anyone was around, but no-one dared since our mate was being threatened with juvenile detention.  Everyone was asking each other who had grassed when we could get each other on the phone, but no-one knew, or so they claimed.

Lying on the deck of that historic warship and watching the meteor shower, I realised that I’d left a little piece of my heart in The Hidey Hole when it was blown up.  I never really saw those friends again since that was our last year at primary school and I ended up going to a different secondary from them.  I hated my new school and most of the kids therein, it being largely populated by entitled bullies, many (but not all) teachers included.  There were times when I felt so alone and worthless that I would stay awake all night in tears, dreading the next day.  Summer would never be the same again.

As another spectacular Perseid meteor blazed across the sky, I thought about all the close friends who have come and gone from my life.  Nothing lasts forever.  Not even the mighty Sarinda, whose copper nails and fixings will eventually disintegrate.  Not even the captain, who seems invulnerable to the stormy seas of life.  Not even the first mate, whose fixings are only 21 years old.  And definitely not me, whose sails just can’t catch the wind at the moment, it seems.

Having not seen another meteor for ten minutes, I picked up my rucksack and checked that the tide had gone out before climbing down into the lethal mud and its unseen gullets that swallow wellies, sometimes people.  As I slopped through the blackness, one last Perseid, bright and green, appeared to fall into Moel Famau across the river, right into the nipple on its peak.

I made my wish before the vapour trail faded out of sight.  That’s the rule, you know.

As I walked along the water’s edge, I could hear a boat engine following behind me in the darkness all the way up to the slipway at the boatyard.

A voice from the darkness.  One of the local fishermen.  ‘See that shooting star fly into Moel Famau?’

‘Can’t tell you that,’ he said, dragging his dinghy up the slip.  ‘Wouldn’t come true, would it?’