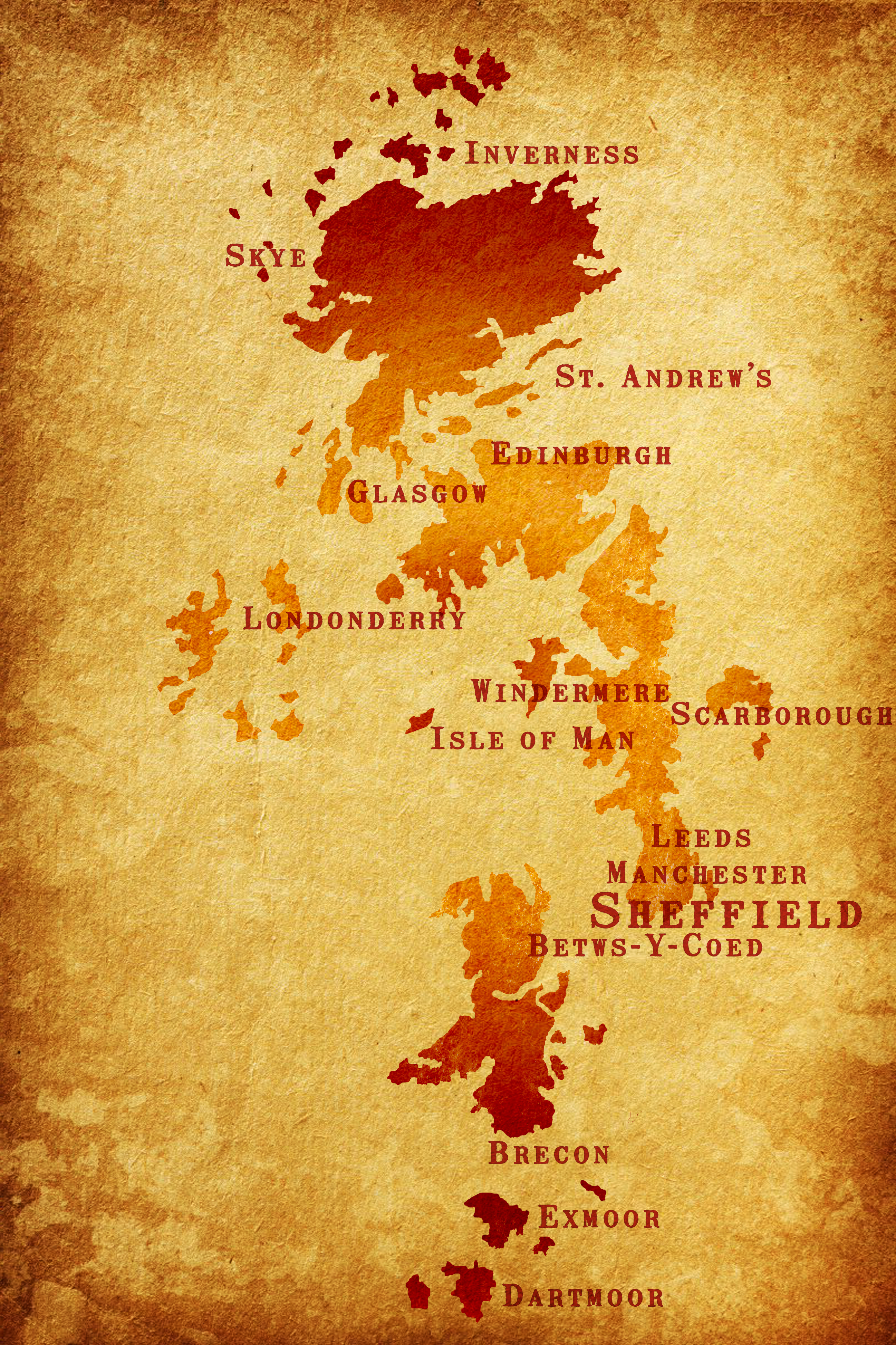 A rough map of the British Isles as they will be in the future, having been decimated by rising sea levels.  It’s based on elevation, but also evacuation points for major cities in the event of such a disaster.  Edinburgh and Glasgow sadly did not survive, but two old Navy warships are anchored where they used to be, and they are named after the now-Atlantean cities.  They also guard the Caledonian Straits and prevent citizens escaping from the mainland to the dangerous climes and harsh wildernesses of The Highlands, where they cannot be controlled or surveilled.  Sheffield is now the British capital, and Leeds is a major port.  The most climatically dangerous areas are marked in red, and are generally abandoned.  Dartmoor and Exmoor are exceptions to that rule as these islands house institutions.  In the case of Dartmoor, the prison – and indeed the whole island – is designated for the criminally-insane: those deemed too dangerous or too expensive to rehabilitate roam here.  Exmoor is home to the largest prison complex in Europe.  The structure is built to withstand the drastic changes in climate, whereas many of Dartmoor’s original buildings have been damaged and left to rot, like the inmates.

Having lived near the sea all my life, it has permeated every nook and cranny of my consciousness like saltwater and sand.   My childhood playground was a marsh next to an estuary, and is still my playground now.  It’s something that will never leave me.  It might seem odd to mark the time spent away from the sea, but I feel as if I’ve been locked in a box when I spend too long inland.  There are possibilities when you’re next to the sea, even a large river: it’s a gateway to the world, if you have enough imagination.  The professor’s boat is actually based on a friend’s, moored in North Wales.  I visited him recently, and over a bottle of rum and a hurricane lantern, he imparted that he was leaving for Iceland to clear his head.  I clanged some dreadful quip about Peter Andre and/or Kerry Katona, but he was completely serious, and asked if I wanted to crew.  I asked how long we’d be out there and he replied, ‘a couple of months, probably’.  I turned him down, but the combination of rum and imagination seems to have cemented the idea in my head like a mooring bollard.

I suppose we all have our reasons for going to Iceland.